WPP’s new branding agency: boss Jim Prior on what staff and clients can expect from merger 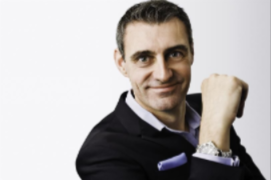 Tony Walford, Partner at Green Square, was delighted to comment in The Drum on Friday.

WPP’s shock move to consolidate five of its leading branding businesses into one new agency will give it greater global clout and satisfy clients’ growing desire for simpler relationships with their marketing partners, according to the man who’ll be leading it.

Jim Prior (pictured above), the current chief executive of The Partners and Lambie-Nairn, will take up the global chief executive post when his consultancies merge with Brand Union, Addison Group and VBAT to form the yet-to-be-named new agency in January 2018.

Between now and then, he and the combined 750-strong worldwide workforce will have to iron out any client conflicts, figure out how several senior figures who share similar job titles can coexist within a single structure and – perhaps most importantly for a branding business – settle on a name.

As daunting as that all may sound, Prior betrays no signs of trepidation when he speaks to The Drum in the wake of an announcement that had been kept impressively under wraps. If anything, he is bullish about the task ahead, styling the new agency as a one-stop-shop for clients looking for everything from brand strategy to motion graphics and content creation.

“For clients what it means is more services, more joined up,” Prior says. “We join that up for them under the same leadership and contact points that they’re used to.

“Clients working in the complexity of the world today need offers that are more holistic and more simple to navigate. That is a fact.”

Prior points to a project for Franco-German TV network Arte, for which The Partners and Lambie-Nairn brought to bear their specialisms in brand identity and on-screen graphics respectively, as evidence of the demand for combining skills under one roof. “When you break down the distinctions between agencies, and you start to offer services in a joined-up fashion, it just makes sense. Clients are ready and willing to accept it. It’s what they’ve been asking for in some ways.”

So that’s what the merger is intended to do for clients, but what about for WPP? There will clearly be efficiencies (more on that in a moment) but one of the most appealing aspects for Prior is the “scale” afforded by having a single global business operating in 20 territories as opposed to five fragmented smaller shops that can’t pack the same punch. Perhaps surprisingly given that these agencies market themselves on being branding experts, he admits that in their current form “perhaps [they] haven’t been as well known in the global marketplace as they deserve to be”.

“We have agencies coming together here that individually have incredible capabilities and sometimes I’m astonished that the businesses aren’t much bigger than they are. But the issue is awareness.

“It’s on us to make sure that organisations in the world that could buy and benefit from those services are aware of them. And that’s really difficult to do when you’re 40 people in London or 80 people spread across three different offices. It’s much easier to do when you’ve got 750 people and when you are among the three biggest players in your industry.”

The decision to amalgamate agencies with a combined 150 years’ experience of operating as individual entities comes against a backdrop of increasing consolidation within their WPP parent group. In June, WPP merged media agencies MEC and Maxus into a new operation called Wavemaker, and then a month later it confirmed plans to combine digital agencies Possible and Wunderman. Last week it announced that it was folding Rockfish Digital into VML.

Prior says he “fully expects there to be” merging of offices, which will naturally trim some fat off WPP’s bricks and mortar overheads. “If we’re going to be one group then we have to be together in order to make that work effectively. In much of the world that’s very, very simple. In other parts of the world we’ll have more to think about how to make that happen.”

Asked if this move means there will be redundancies, Prior insists that won’t be the case. “[We’re] not planning any reduction at all. This is very much about growth. We will be working with all the people that are currently part of each of the companies finding ways to join all those skills up so that they combine to create an offer that’s greater than the sum of its parts.”

Prior says the “detail of the structure” has not been determined yet, but given how these agencies each have a number of senior staff occupying similarly titled leadership and creative roles, it will be fascinating to see how they are shepherded into a new hierarchy. Perhaps for this reason, Prior admits the new agency “might look a little unorthodox in some ways” compared to its rivals.

“We have had conversations with all of those senior people about this and they are all fully supportive. I think the reality is we’re not going to design this on the basis of what looks good on an organogram. This is going to be about how we bring senior client-facing people with incredible skills into an organisation where everybody joins up and works together to deliver value.”

Another major challenge will be deciding what the new agency should be called. Given the equity that exists in marques such as Brand Union and The Partners – not to mention their obvious appropriateness for the new venture – Prior admits it is “a temptation” to retain one of the existing monikers. “We don’t want naming as a dart into the wall process. We’ll run it as a proper structured strategic process. It’s not out of the question that we would take an existing name, but neither is it a decision that that’s what we’re going to do. We’re branding experts so it better be good.”

One name that won’t be changing, however, is VBAT’s. The Amsterdam agency’s services will be offered as part of the new group, but it will also retain its own identity. “It’s a very strong brand in its own right in the Netherlands which is where most of its business is today,” says Prior. It has also only recently undergone a similar process of combining its people and clients with another agency – dBOD – which it acquired in April 2016, so “the timing wouldn’t be right for it to change right now today”.

For all that the marketing services landscape has undergone profound change in recent years, the branding field has for the most part remained untouched by the disruption. “It’s been out of vogue for a good while now,” says Tony Walford, a partner at the M&A advisory Green Square. But he predicts the WPP shakeup could herald a “renaissance” in activity in the sector.

“In recent years, global brands have focussed on short term initiatives in response to ever changing, and sometimes fickle, consumer demand for their products,” he tells The Drum. “As a result, big brand strategy and identity programs have been pushed to the back seat in favour of short-term tactical responses.

“So we could be seeing a resurgence in demand in terms of the more strategic and long-term brand thinking, positioning, identity and communication disciplines. All the marcoms networks have these capabilities within their walls in various forms and it will be interesting to see how the likes of IPG, with brand agencies such as McCann Enterprise and FutureBrand, and Omnicom – owners of Interbrand and Wolff Olins among others – respond.”