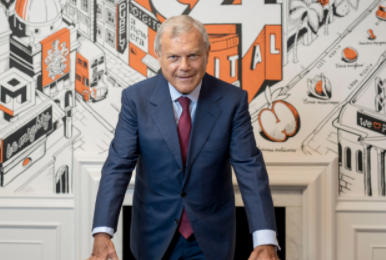 Tony Walford explains why the company is performing so well right now.

If there’s one iron rule in the marcomms business, it’s this: never write Sir Martin Sorrell off. You do so at your peril, for the industry veteran’s ability to bounce back, reinvent himself and to prosper when rivals suffer is quite remarkable.

Back in the late 80s, when his (then relatively tiny) company WPP bought the famous ad agencies J Walter Thompson and Ogilvy & Mather for the eye-watering sums of $566m and $825m respectively, observers thought him mad (including David Ogilvy himself, whose comments on Sorrell at the time are infamous for their directness).

He was written off as no more than a bean counter who knew little of the creative world. But over time, he built WPP into the world’s largest advertising and marketing group and managed to keep shareholders (reasonably) happy over three turbulent decades. Sorrell made some mistakes, and arguably made some ill-advised purchases, but like all good businessmen he learned from them and was always able to move his business onwards.

In 2018 he was forced to leave the company he’d built, but instead of retiring quietly (perhaps to enjoy his beloved cricket or to spend time with his family) he started up a new company, S4 Capital (now rebranded Media.Monks). Observers, including sympathetic ones, wondered if this was the right thing to do, especially as S4 was built from a shell company and Sorrell plowed £53m of his own money into the venture.

But three years later, it turns out that Sorrell might have been right (again). In a business world disrupted by Brexit uncertainty and ravaged by the Covid pandemic, S4 is doing rather well. Last month it reported booming business amid what it described as a “post-pandemic rebound” in the global economy and that it was gearing up for expansion after revenues were at levels “beyond expectations”.

The company has agreed a seven-year £321m loan with Credit Suisse, HSBC and Barclays, plus a five-year revolving credit facility that could allow the company to borrow as much as £100m from the aforementioned lenders while adding JP Morgan and BNP Paribas to the list. Impressive names to get backing from and it looks like Sorrell will be continuing the acquisition trail.

So what’s gone right? First of all, Sorrell moved quickly and decisively. No sooner had he set up S4 than he started making acquisitions, first up the “creative production company” MediaMonks for a whopping $350m in July 2018 and then San Francisco-based consultancy MightyHive for $150m five months later. Other acquisitions followed, Sorrell building his new empire by consolidation (24 companies have been bought to date) and, observers say, further acquisitions are planned in all all-important Asia-Pacific and North America regions.

So far, Sorrell’s new venture is very different from WPP – the focus has been on digital and high-value services and consultancies, rather than ‘legacy‘ agencies. There was also an emphasis from the start on a unified, client-centric approach, very different from the sprawling, diverse cultures of the holding companies like WPP, IPG, Publicis and Omnicom.

Indeed, earlier this month Sorrell made his intentions clear when he announced the S4 rebrand as Media.Monks, a team of 6,000 “digital-first” experts working as a single P&L across 57 “talent hubs” in 33 countries (with S4 remaining the “financial brand” for the LSE listing and investor/financial communications).

And this is why S4’s share price has risen so steeply in recent weeks – it’s because it is focused. Acquisitions are made because they fit with the structure and strategy, not because they can expand the empire or because they have a great client book. Quality over quantity, as it were. The boss is also pretty hands-off compared to how he used to be, content to let his employees and leaders’ entrepreneurial talents shine, as the core offer, strategy and philosophy remains intact.

S4 is also, Sorrell claims, driven by “a core, client-centric proposition that defines the parameters of their increasingly global service offer”. As the (new) saying goes: “In today’s market, specialist and global trumps generalist and local every time.”

It should be pointed out that it’s not just S4 that is doing well – those “legacy” holding companies, IPG, WPP and Publicis have also recently published encouraging figures, suggesting that they are benefiting from a post-pandemic bounce (although Dentsu, Omnicom and Havas are lagging a little).

And if we look at S4’s latest acquisition, we can see where it’s headed. A couple of weeks ago it snapped up Destined – an Australian marketing firm specializing in Salesforce. S4 said it will merge Destined with its data division Mightyhive in a bid to bolster its presence in Asia Pacific.

Destined, which is a Salesforce “platinum partner”, has provided cloud services for its Aussie clients including Spotify, Panasonic, Wingate and Weston Foods.

“At S4 Capital we differentiate ourselves by being the most agile, knowledgeable and creative partners to the world’s leading platforms, hardware and software companies and I’m delighted to welcome [the team] as we expand our relationship with Salesforce providing services around their various clouds in Asia-Pacific and beyond,” said Sorrell.

A Salesforce partner? Cloud services? Data? That won’t get the marketing trade press’ pulses racing. But I suspect Sorrell is long past caring about that. He obviously has a very determined view as to where the future of marketing is, and that’s where he’s going to stake his money (and legacy). Destined was bought because it fitted in with the S4/Media.Monks company vision and structure, because it was based in a region of growth, and because it operates in a space that is only going to become more important over time.

In addition, Sorrell is offering the owners of the companies he buys a slightly different proposition. Rather than the more usual earn-out over time, he offers a cash and equity model (albeit with time locks and other limits). This way he can immediately integrate the acquired entities without the need to ring-fence performance for earn-out measurement purposes. Thus, the vendor shareholders get some cash upfront and, in accepting shares in the overall S4 business, they are buying into the future combined vision. Given the impact of Covid on many agencies, having this spread risk may be more attractive to an earn-out which is totally dependent on an agency’s solitary future performance – albeit you are banking on the other agencies in the group, particularly the larger ones, continuing to deliver growth.

S4 shares are at their all-time peak right now with a market capitalization of £4bn. Given it has a (now) proven model in which it has scaled quickly, both in terms of clients and employee numbers and, so long as there is comfort the company isn’t over-valued and will continue to scale, having S4 equity as part of a deal could be pretty attractive to an incomer.

For investors, sellers, even Sorrell-watchers, what’s not to like?