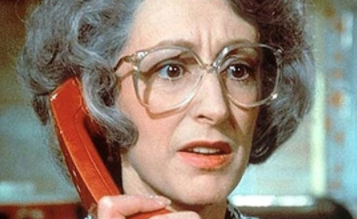 Pre-lockdown there was already a strong case for companies to lead their strategy with digital and tech-driven activity, and the Covid-19 pandemic has only served to accelerate this. Green Square’s Barry Dudley weighs in on how companies can plan for the long-term in light of this, by finding an ‘ology’ of their own.

For those of my generation, you will remember the much-loved ads for BT back in the 1980s and 90s. I’m talking about the campaign that featured Maureen Lipman as Beattie, an archetypal grandmother using BT landlines (remember those?) to keep in touch with family and friends.

Perhaps the most memorable of these was when Beattie phoned her grandson, enquiring after his exam results. The crestfallen lad explained that he’d failed:

Grandma Beattie: “You didn’t pass anything?”

Grandma: “An ology! He gets an ology and he says he’s failed. You get an ology, you’re a scientist!”

Roll forward to present day and Trinity McQueen, an award-winning insight consultancy, recently bought itself an ‘ology’ to build on its behavioural science core, acquiring Blinc Partnership in February.

Commenting on the deal, co-founder of Trinity McQueen, Anna Cliffe, said: “Blinc has unrivalled experience in TV and media and their innovative tech means clients can get quick feedback on how to develop successful TV shows, films and now advertising content.”

For me this is smart on many levels – Trinity McQueen has acquired a complementary business which accelerates growth; gained access to a vertical (TV and film) it was previously not in; now has an ‘ology’ in prediction markets, but probably most prescient of all – it is now looking at what other verticals its ‘ology’ can be taken to. And of course, for better or worse (depending on your viewpoint), behavioural science has taken on new importance during the current pandemic, so perhaps Trinity’s swoop for Blinc was even smarter than it seemed at the time.

In our last blog, we finished by saying data, tech, and digital were going to be key areas for agencies to have to reinvent themselves towards in a post-pandemic world. In our view, Beattie’s ‘ologies’ are going to be really important.

So, has your agency worked out what its ology is? Because you’ll need one to reinvent, and you’ll need to reinvent at least part of your business in order to prosper in the as-yet unknown world of the “new normal”.

One thing we do know about this dawning new world is that face-to-face meetings and business travel will be both more difficult and expensive than they have been hereto, but also much less common or necessary.

Who’d have thought, for example, that a previously obscure video conferencing tool called Zoom would rise to such prominence? Or that Microsoft’s Teams software, aimed at the enterprise sector, would suddenly be also marketed as a tool for bringing families and friends – as well as business teams – together? Zoom and Teams are likely to play a more important role in the future than Lufthansa or BA. Teleconferencing has its issues of course, but the technology is now accelerating at an unprecedented rate, spurred on by Covid-19.

In The Times newspaper recently, Microsoft boss Satya Nardella put it rather succinctly: the need for social distancing would lead to a “remote everything”. It had also, he added pointedly, brought the adoption of various technologies forward by “at least two years”. In the same piece his Google counterpart, Sundar Pichai, pointed to a massive upturn in digital activity and forced migration to online work, as well as shopping, entertainment, medicine, and more (Google also has its own video conference tool, Meet, of course).

Adapting to these new ways of working is one thing, but what are you doing to get your own ‘ology’ to ensure you have a sustainable differentiated offer and will emerge as one of the future winners? A move to more digital and tech-driven activity seems clear – software, methodologies, and tools will play an even bigger role in meeting clients’ needs. These will either have to be built from the ground up – requiring businesses to buy in new skills – or else they’ll have to use their creative abilities to come up with ways to leverage or build on existing tools and platforms.

Another challenge – or opportunity – is the industry’s lack of on-demand data insights, both agency and client-side.

Back in April the Chief Marketing Officer Council, which represents CMOs, surveyed its 16,000 members (in around 10,000 companies) in an effort to understand the global pandemic’s impact on global strategies, operations, budgets, and outlook.

The vast majority (84%), the survey said, expect the pandemic will multiply business disruption globally, while even more (90%) expect to make changes to their marketing plans. However, two-thirds (66%) said they do not have enough real-time visibility and insight into the pandemic’s impact across both the demand and supply chains, while a similar number (69%) are not satisfied with “the quality, timeliness, and usefulness of decision support data”.

The CMO Council said marketers are being forced to make decisions the “old-fashioned” way, tapping into their experience of, instincts about and knowledge of customers and the market, rather than following the data. Although, it’s worth pointing out that most marketers seem to feel they are addressing customer consternation and concern either “extremely well” [36%] or “moderately well” [56%]. This points to a need or opportunity to develop data tools to help clients.

CMO Council executive director Donovan Neale-May said at the time: “Companies with real-time visibility into supply and demand chains are better prepared to make informed decisions, as well as adjust, redirect or moderate marketing activity. Unfortunately, not enough do, and so many are struggling to re-calibrate operations and spend.”