The perfect storm that’s blowing up in media 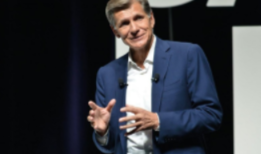 Talk to someone outside of our industry – a ‘lay person’, if you like – about marcomms, and it’s highly unlikely that you’ll need to explain to them what advertising is.

In advanced economies like those in the west – as well as developing ones elsewhere – advertising is ubiquitous. It’s an engine of modern capitalism.

So, if you tell someone that you work at an advertising agency, they will have a pretty good idea of what you do – you work at a place that makes adverts, either on TV and radio, in newspapers and mags, or on posters or online.

But talk to them about media agencies, and the chances are you’ll get a blank look. An explanation of what a media agency is, and what it does, will almost certainly be required. Tell them that it’s about deciding where, and when, ads should be placed, and in which channel and medium, and they’ll start to get it. Tell them it is a vast, multibillion pound industry that employs many thousands of people and they’ll be surprised, but they’ll accept that it’s obviously a big deal.

And so it is. Media has provided much of the fuel for the big holding companies’ growth. But now media, once the poster child of marcomms, is facing something of a perfect storm, a series of events and trends coalescing that threatens the discipline’s very existence.

To consider why, we need to go back in time a little. Back in the 1950s and 60s, the golden age of print advertising and the birth of TV campaigns, the Mad Men ruled. Media was just an adjunct of creative. The Don Drapers came up with the genius ad, the suits sold it to the client, and the media department put it on TV or in the papers. They got a commission that covered all of this and everyone was happy.

But as the media landscape got more complex, more diverse through the 1970s and 80s, some bright sparks realised that media buying and planning could be a separate discipline, as wealth-generating and as glamorous as creative. In the late 1980s media houses began to spring up, offering clients a bespoke service. What clients particularly liked was the fact that the bigger the media agency, the better the discount they could negotiate from media owners (the TV businesses, publishers, poster site owners etc).

And so the media agencies were born. Hugely cash-generative and offering margins of 20% or more, they helped establish the holding-group-dominated marcomms landscape we see today. WPP, Publicis, IPG, Omnicom and Dentsu Aegis Network would not be the colossi they are today without the scale that their media offerings bring.

But in recent times, things have started to change. People have been asking questions – and it’s not the lay people, it’s the clients.

I know – and I know others who know – people from the client community who’ve started to question just what it is their media agencies do. This is partly because everyone’s looking for accountability and transparency these days, some evidence of a return on their investment; but also because its getting harder and harder for people to understand what’s going on.

There’s no shame in this. Because of technology, media has become advertising’s Wild West, a lawless land where the usual rules don’t apply; where nobody knows what’s waiting for them in the next valley, or who the good guys are (the baddies don’t always wear black hats).

The rise in the noughties of mobile and digital got everyone excited – clever algorithms could serve advertising to just the right people at the right time, transparency would reign supreme, automation would cut cost and complexity, and ROI would be available at the touch of a button.

So far, so good. But things didn’t work out quite as planned. Four or five years ago, clever CMOs started to wonder whether something was up. Nobody could quite put their finger on it, but something just didn’t feel right.

Then a series of investigations by the press, the Association of National Advertising in the US and others started to crystalise things. Reputable brands’ messages were turning up in all manner of inappropriate places – next to pornography, or Isis extremist videos, for example.

A number of blue-chips began a (fairly short lived) boycott of YouTube, with Google forced to promise to clean up its act and intervene more in the automated ad process. Next, it emerged that the media supply chain was far more complex than anyone had thought, with layers of intermediaries all taking a cut, meaning that everyone (not just clients) ends up paying more than they perhaps ought to.

Last month, the world’s biggest advertiser, Procter & Gamble, said it was planning to cut its agency roster by (another) 50% as it looks to “reinvent” its relationship with agencies and automate and in-house more media planning, buying and distribution.

Chief finance officer Jon Mueller has been widely quoted, saying that while P&G is “prepared to pay” for creative talent, there are other areas that it is not prepared to pay for and it will be looking to “new models” to improve local relevance, speed, quality and lower costs.

“We need the contribution of creative talent and are prepared to pay for that. We’ll automate more media planning, buying and distribution, bringing more of it in-house,” he said during a results call last month.

Observers say that P&G’s suggestion that it may take some media work in-house and have its agencies work more flexibly (perhaps on a project basis, rather than on retainers) won’t do much to boost the confidence of the big holding groups, which are struggling for growth amid a focus on costs at some of their biggest clients and competition from the tech giants and consulting firms.

Where P&G treads, others usually follow. Unilever, for example, is also looking to make cost savings of €2bn in overheads and brand and marketing investment. And the likes of Mars, Nestlé and Wal-Mart are reviewing their relationships with agencies and looking to consolidate.

Moeller has said that P&G’s focus on media transparency is paying off.

“There is more opportunity to eliminate waste by reducing excess frequency within and across channels, eliminating non-viewable ads, and stopping ads served to bots or adjacent to inappropriate content,” he said during that results call.

Perhaps most worrying for the big media agencies, P&G has said it has eliminated waste while also increasing reach by 10%. Last year, P&G said it had cut $140m in digital ad spend with no detrimental impact on sales.

And here’s the biggie – once they’ve dealt with digital, clients will start looking at “traditional” media, like TV. Why not deal with Sky, NBC, ITV and the rest direct, and cut out the middleman?

In a now-infamous speech in January 2017, P&G’s chief brand officer Marc Pritchard said he’d discovered that one of its media agencies was buying digital media with P&G money in a deal that saw the agency receive extra advertising inventory that could then be sold on to other clients at a profit.

Also last year, Debbie Morrison, director of ISBA (which represents the interests of advertising clients) said she no longer believed media agencies “have got the best interests of their clients at heart”; ISBA subsequently created a new framework agreement to guide how clients should contract media services.

There’s not a lot of trust or confidence out there right now, and the situation seems to be getting worse. Also, in a market where much work is commoditised, it’s difficult to put your rates up. The old practices of charging “surcommissions” and “kickbacks” are no longer deemed acceptable (if indeed they ever were).

So, what can the Mindshares and Zeniths, and their holding companies, do? What place is there for them in the second decade of the 21st century and beyond?

One thing is for sure – they aren’t dug into a bunker doing nothing. These are some of the most successful and significant marcomms operators for a reason. And as we all know, where there is challenge, there is also opportunity.

In our view, there has to be an emphasis on transparency – real transparency, not the slightly opaque kind. In order to trust an agency, the client has to be able to see the processes involved in getting their ad onto a screen or poster; not only see, but understand. They need to know where every penny is being spent, and why.

Trust in media agencies has been undermined, but it hasn’t been entirely eliminated – yet. Complexity needs to be opened up. Complexity suited certain unscrupulous players, and was intentional.

There has be a back to basics approach, especially on the matters of ethics and accountability. In this regard the big boys perhaps have much to learn from the independent media shops. Take December 19, a media planning and buying agency, that has from the outset adopted a “wholeheartedly honest and customer-focused approach” with the “vision of a company with integrity and transparency”.

Dan Pimm, a co-Founder of December 19, said: “It may seem obvious but creating a business with a client-first philosophy was groundbreaking when we started, while much of our competition focused on making profits. We’ve created a transparent remuneration system for our customers providing them with a clear understanding of how we are making our money, which also allows us to trade correctly with media owners and ensures there are no compromises to our neutral media planning and buying decisions”.

Such indies have carved a niche for themselves with a certain kind of client – one that’s big enough to want to do a decent amount of advertising but too small to take its media function in house. Perhaps now is their time and the niche spreads more generally.

As well as a commitment to transparency, the new indies have positioned themselves as creatively-minded problem solvers for clients. Solving people’s problems for them is a nice high-margin business, a better space to be in than high volume/low margin semi-automated commodity trading. And if you solve someone’s problem for them, you’ve got their trust and loyalty.

And what of that all-encompassing word ‘content’? For some time now media agencies have grappled with the potential opportunity of not only providing the pipes for delivering content, but actually generating the content that flows through those pipes. Arguably their heritage of processing volumes, integrating systems and managing the detail means that the media agencies began from a strong position to embrace and leverage tech and data – but it’s the ones that win on the content front that will lead this sector into the future.

There is one other issue that falls out of all of this – returning the media agency world back to one that is an attractive place to work, that lures the next generation of bright grads away from the tech, consultancy, banking and startup alternatives. This is a big issue across marcomms generally and one that we’ll be looking at in a future blog.

I am sure Sir Martin and co are a step ahead of me in their transformations, but it is certainly going to be fascinating viewing to see who sails calmly out of the storm…