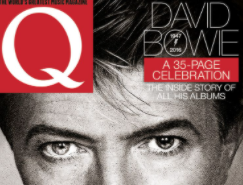 Back in the summer, Q magazine closed. If you’re of a certain age, or have more than just a passing interest in music, you’ll remember Q in its pomp. It was launched in 1986, a product of the publisher EMAP’s can-do culture and devolved management style (of which more in just a second).

Q’s decline was long and slow, but Q was revolutionary in its time; just as the CD was starting to take off, and record companies realised that they could make a great deal of money repackaging their back catalogues and heritage acts for the shiny new digital disc era, a couple of bright sparks at EMAP realised that this new musical normal needed its own magazine.

Back in 1985, the music press was ruled by the “inkies” – weekly monochrome tabloid newspapers like Sounds, Melody Maker and NME, that were news-led, their content driven by release/touring schedules and the news cycle. There were colour mags, of course, but they were either aimed at teen poppers (Smash Hits) or had a lifestyle bent (The Face). Something different was required and Dave Hepworth and Mark Ellen came up with Q (as in “cue the music”) – a glossy, perfect bound, full-colour monthly mag that was perfect for the CD era. (and one you could bolt a CD mixtape to the front of to encourage take-up).  At once respectful and serious but also self-aware and slightly irreverent, Q featured artists like Paul McCartney, mocked (or ignored) by the inkies but who still had substantial fanbases; and – crucially for advertisers – these fans were slightly older, definitely more affluent and keen to replace battered old vinyl LPs with shiny compact discs.

Q was massively successful and influential because it was the right product at the right time, executed in just the right way.

But Q was only allowed to come into being because EMAP’s company culture permitted it. Beginning life as a regional publisher in the East Midlands just after WW2, the newly renamed East Midlands Allied Press started a magazine division, based – and this is a very EMAP thing – on a hunch; the company’s printing presses were often dormant, so why not make use of that capital? And so, Angling Times was born in 1953, followed by Motor Cycle News a couple of years later. EMAP’s leadership widely encouraged an entrepreneurial approach; different divisions were encouraged to come up with ideas, and to try them out.

This led to hugely successful consumer and B2B titles such as Smash Hits, Q, Mojo, Heat, Car, Drapers Record, Red, Closer and dozens of computer and gaming magazines. EMAP’s swashbuckling approach and success even had an influence at its staid old rival, the “Ministry of Magazines”,  IPC: a young editor named James Brown was given carte blanche by the management and he developed Loaded – a mag that was as successful and influential in the 1990s as The Face and Q had been in the ‘80s.

EMAP (“Every meeting a party”, said employees at envious rivals) expanded rapidly in the 1980s and 1990s, buying titles (including a small indie men’s grooming mag called For Him, relaunching it as FHM, which sold 850,000 copies a month in its prime) and launching others. It also saw the opportunities in commercial radio, picking up still-successful stations such as Kiss and Magic for a song.

As it grew, it became more cautious – simply repeating successful and proven formulae, rather than trying new things – and centralising management.

EMAP’s titles – especially generalist ones, or the publications tied into crazes, such as Zoo or FHM (“lads’ mags”)  – were badly affected by the structural disruption that wreaked circulation and ad revenue havoc in the industry in the noughties and 2010s; but increasing caution meant EMAP started to look increasingly flat-footed.

In fact, for many an ambitious creative company – from publishing, music labels and A&R, through to TV and film production – encouraging a decentralised, entrepreneurial, gut feeling approach has served them well. And this of course is also true of advertising and marketing – it’s why ambitious creatives, suits and planners are willing to forgo the comforts of big agency life to take risks by joining a startup or a swashbuckling indie, and why investors are keen to pour cash into these feisty minnows.

Ask anyone of a creative mindset – in any industry – what matters to them most, and they’ll talk about stuff like autonomy, freedom, unrestricted thinking, the chance to have one’s ideas taken seriously, being listened to, adventurousness, the embrace of risk and of the different, flat hierarchies, light-touch management and the ability to act quickly.

Big pensions, a company car and a chance to climb the management ladder matter much less.

Now I mention all this because, as we know, the marcomms industry has been going through a period of transition: first because of the evolving needs and demands of clients and of consumers; then because of the disruption wrought by digital; and now because of the Covid-19 pandemic. Interestingly, on a macro level, one of the features of the coronavirus outbreak here in the UK have been the calls for more autonomy. Central government’s responses have proved to be unpopular and largely ineffective, and the calls for policy decisions to be devolved to a more local level have become louder, not just in the UK’s four nations, but within England too. Just look at the scrap brewing between Manchester’s Andy Burnham and the Government regarding moving to Tier3 as I type.

In fact, as the pandemic unfolds and develops, I believe that decentralisation generally will be an important feature of our world – not just because so many white-collar workers will be based at home rather than the office, but because new outbreaks or flare-ups will require rapid thinking, with solutions tailored to local conditions. We may also find ourselves more geographically confined than we have done for decades – look at the mothballing of out-of-town shopping malls and retail parks and the rise of local shops.

And brands and their agencies will have to adapt too. A one-size-fits-all approach is probably no longer fit for purpose. So, a global brand will need to adapt its messages according to the territory – you can’t speak to a locked down infection hot-spot in the same way you would a Covid-free zone. Similarly, a message could become out-of-date, tasteless or downright offensive in a matter of days. This means that agencies will have more work to do. Instead of just taking a global ad dreamt up in Beijing, New York or London and adapting it for local language and culture, local shops will have a bigger, tactical role (maybe even strategic too). And they’ll have to make sure they can react and work quickly.

Inevitably this will suit smaller agencies with flatter and more responsive management rather than big global agencies with layers of approval to work through. So, the big boys will have to learn to let go; management will have to learn to delegate and trust more. They say that advertising is all about changing behaviour and solving problems – and if there is a time when these two skillsets will be needed more than ever, it is now.

It seems to me that the time for long-term thinking or grand strategy is, temporarily at least, over. While playing the long game (or at least having an eye on it) is always desirable, survival, speed of response and quickly seizing opportunities and taking risks are where it’s at in the time of coronavirus.

This leaves big legacy agencies, and the holding companies – WPP, IPG, Omnicom, Publicis, and Dentsu that own them in a tricky spot. If they are to have any value (both socially and for shareholders) they are going to effectively have to become invisible. They are going to have to let go, devolve and massively slim down their central functions. This will require trusting in the creatives and suits on the ground, moving fast and encouraging risk and innovation. In this pandemic, we are increasingly learning that the old ways of doing things aren’t working. Thinking differently, trusting in the “crazy ones” (as the famous old Apple ad campaign of the late 1990s was wont to say), and having balls of steel is what’s needed now, in 2020 and beyond.

Who’s up for the challenge?

Quite some legacy - reset the numbers, delivered a $2.3bn deal, but for me Michael Roth’s focus on people, culture and diversity underpinned it all…’ https://bit.ly/3FM8p2u

Sir Martin Sorrell is a man that can never be underestimated. Great piece from our partner Tony Walford published in The Drum. @MeetTheMonks @S4Capital