In the battle between ‘old media’ and digital, the oldies aren’t beaten just ye 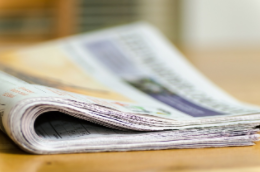 Over the past few weeks, I (and, I suspect, a lot of other people) have been thinking about news. Not just the news, but news.

Ever since last year, with Brexit, Trump and events in Europe and elsewhere, news has been moving to the top of the news agenda. Ever since the inauguration of Donald Trump less than a fortnight ago, the subject of news has not just moved to the top of the agenda; the gathering, reporting and dissemination of news has fallen under the fiercest, brightest spotlight it has endured for years.

The key concern, and subject, is of course ‘fake news’. The source of this fake news – outrageous, unverified stories, concerning subjects of great import, such as the US election and presidency, and events in the UK, Europe and elsewhere – is usually blamed on social media, but fingers have also been pointed at traditional media such as TV and newspapers.

This scrutiny is right and proper. Democracy cannot function unless the populous is armed with facts (true facts, not ‘alternative facts’), and the media – all media – have a duty to report the truth and the facts. Obviously this reporting will often be coloured by inbuilt prejudice, or the increasingly impatient demands of online news consumers (meaning that there’s sometimes not enough time to verify facts), or sometimes by sins of omission or, worse, commission.

The anti-EU media (principally the Sun, Daily Mail, the Express papers and the Telegraph titles) are often blamed by the remain camp for driving the easily-moulded into the arms of Brexit, but there’s very little evidence of this, and, I suspect, it overstates the power of newspapers. While there is no doubt that mainstream outlets such as the BBC, ITV and Sky often allow the newspapers to set the agenda, readership of the papers in the UK is at an all-time low, and there is a generation of young people who have never purchased a print paper (or even watched many ‘linear’ news bulletins).

And this viewpoint also ignores the fact that people read newspapers to have their suspicions, prejudices and worldviews confirmed and reinforced. Editors make decisions on what they think their readers want to read; hence the Daily Mail and The Guardian may report a story in very different ways, but the ways they report it will reflect their very different readerships – and their readers would expect nothing else. Just think of the consequences if the Guardian put a Mail-style spin on Brexit or the migrant/refugee crisis, or vice versa!

However, this catering for one’s readership should not allow for the dissemination of flagrant falsehoods. Editors have a duty to the truth, as well as their readers. Nor should they allow their outlets to become mere echo chambers.

In an era when the traditional media’s control of news is fading fast, and anyone with a mobile phone has instant access to thousands of feeds (many of them peddling opinion as fact, passing comment off as news, or just spreading unsubstantiated rumours), and can indeed become a news broadcaster themselves, the need for scrutiny and scepticism of what we read, and proper citations for, and fact-checking of, what we write, has never been greater.

But the truth or otherwise of news isn’t just of concern to publishers, media outlets and journalists, it’s also of concern to brands. If, say, Facebook, or a TV channel or newspaper, is seen as a disseminator of less-than-reliable news, brands are going to think twice about placing advertising there. After all, if you can’t trust the editorial output of a particular media channel, why would you trust its advertising messages? This could have a profound and debilitating commercial effect not just on the already weakened old media, but also the rising stars of the online world.

But the events of the past weeks have, I think, presented the media with a unique opportunity. The White House and the president’s press spokesman have practically declared war on the media and the notoriously thin-skinned Trump and his team got into a bizarre spat with the press corps over the crowd size at the inauguration. Then there was last night’s explosive press conference.

These attacks might just galvanise the Fourth Estate in both the US and elsewhere to put its house in order, to regain the moral high ground. Remember too, that here in the UK, the ad-free BBC, despite its recent travails and justified accusations of both pusillanimy and political bias, remains the most trusted news source.

At the same time, the publishers of print newspapers might want to look at a fascinating new study, published on 31 January by professor Neil Thurman of City University and Munich University.

Thurman’s study, which has been peer-reviewed, was conducted in the UK over a full year between April 2015 and March 2016, and examined National readership Survey (NRS) figures for 11 print publications; alongside ComScore data for those papers’ online equivalents. It is the first research to comprehensively account for the time spent reading newspapers via mobile devices.

Thurman’s report shows that 89% of the time audiences spend with UK national newspapers is still in print, with just 7% via mobile devices and 4% via PCs.

Although online editions have doubled or tripled the number of readers national newspapers reach, this increased exposure disguises the huge differences in attention paid by print and online readers.

The research shows that while print newspapers are read for an average of 40 minutes per day, online visitors to the websites and apps of those same newspapers spend an average of just 30 seconds per day.

Scale those numbers up and you can see why newspapers still rely on print for the vast majority of the attention they receive.

And an audience that pays and makes the effort to go to the newsagent, is more committed than a casual browser – something that brands ought to be keen to exploit.

As well as shedding new light on newspapers’ multiplatform performance, this research is the first to follow Ofcom’s recommendation that market share be “calculated from time-spent”. Thurman’s calculations show the UK national newspaper market is more concentrated that commonly believed, with one title having close to a 30% market share.

“Looking at reach or number of readers, online looks a lot more impressive because we’re used to seeing unique users reported per month, while print circulation is reported daily,” he told the website Journalism.co.uk earlier this month.

“But if you’re just looking at the reach, then you are not taking into account the amount of attention people are paying, which you have to focus on as well if you want to understand how valuable print and online are.

“This research, to some extent, suggests that print is an under-recognised medium in terms of the attention it can attract from audiences.

“The print product has characteristics that make it a very effective means of retaining audience attention – the design, the contained experience and the sense of completion when you finish it – but print circulation is declining and online audiences aren’t growing at a rate that’s enough to make up for these losses.”

Old media has another advantage. It is, for the moment at least, run and managed by humans. Last week the Times published a fascinating series of pieces which demonstrated the dangers of the automation which has taken over the realm of digital advertising. Thus ads for well-known and respected brands, such as Waitrose, Jaguar, the V&A, Argos, Mercedes and scores of others, were appearing on inappropriate sites – some of them overtly sexual, some run by extremists. One example cited by the Times was an ad for the Mercedes E-Class which ran alongside an online pro-Isis video which had been viewed 115,000 times.

This is because the process of placing ads on sites has become almost entirely automatic, based on a user’s previous history. So, someone might have browsed the John Lewis site for sofas, probably picking up cookies on their computer along the way.

So, while the targeting of individuals based on their browsing history has benefits for advertisers, the algorithms and cookies that do this – as well as the near-instantaneous ‘bidding’ processes for online ad space – are “dumb” in the sense that they can’t make judgement calls that we humans can.

In traditional media, ad placement is still controlled by sentient beings. Only a malevolent (or grossly incompetent) media agency employee would dream of placing an ad for a family-orientated brand in the ad breaks of a racy late-night film. Nor would they put ads for sex lines in a children’s comic. This is because humans understand context, automatic ad placement programs do not (as yet).

In addition, old media, TV particularly, has a reach and emotional impact that digital, for all its speed and targeting can’t match; witness the sums brands spend in the ad breaks of top-rated shows such as Coronation Street, the Voice or the Superbowl coverage in the US.

The concerns raised by the Times surely offer a ray of hope for old media, which, on the whole, can still offer the judgement that automation cannot. Along with the Thurman report, maybe – just maybe – the prognosis for the traditional media channels isn’t quite as bad as has been painted – providing they can rise to the challenges and opportunities offered above.