As Roth retires from IPG, what legacy does he leave behind? Barry Dudley writes in The Drum 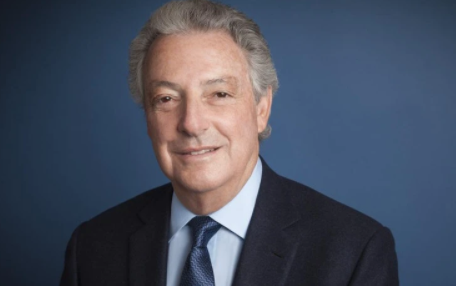 As IPG’s Michael Roth steps down from the holding company, Barry Dudley examines what the departure means for the group, and the industry at large.

It’s the end of an era – no, it really is. Michael Roth, 74, is retiring from what we used to call ’the ad business.’

Roth, who stepped down as chairman and chief executive of the Interpublic Group (IPG) at the start of this year, last week announced that he will retire from advertising on December 31 after serving one year as executive chairman of the holding company giant.

“My time as chairman and chief executive officer of IPG has been a tremendous privilege,” he said in his departing statement. “I am most proud of the work we have done to help shine a light on equity and inclusion, as well as being a value and purpose-driven enterprise. Operationally, we have evolved to meet the needs of an industry that is not only creative, but also increasingly about digital and data. Philippe [Krakowsky, his successor as chief executive officer] has been key to the efforts to move the company forward on all these fronts, working with me and the board to build a contemporary organisation that delivers high-value services for marketers. Our clients, people and shareholders are in very good hands going forward.”

Sir Martin Sorrell, Maurice Levy and Roth were a trio of players that dominated the global marcomms industry for almost three decades. They were different from the ad titans of the post-war era, the David Ogilvys and Bill Bernbachs – they weren’t creative types, they were unashamed money men. Along with John Wren of Omnicom, they built up big holding company empires, mostly through acquisition (sometimes aggressive too) and consolidation.

Now, in an era dominated by a pandemic and ongoing digital disruption, the holding company model may seem hopelessly quaint and outdated, but at the turn of the century it seemed the best way to meet the demands of shareholders for profits; and of clients, whose marketing needs were becoming increasingly global. Big was beautiful, and as it turned out, pretty profitable too. Many in the creative community weren’t happy with Roth (as they weren’t with Sorrell or Wren or Levy), but shareholders and clients were. Business was good.

Roth wasn’t an ad industry guy – he was a certified public accountant who was an alumnus of New York University Law School and Boston University Law School. Before joining IPG, he was chairman and chief executive of Mony, a financial services holding company. Under Roth’s leadership, Mony diversified its business mix, broadened its distribution channels and enhanced its ability to compete in a changing financial services marketplace ​– a lot of parallels to what was required of him when he took over the leadership of IPG from David Bell back in 2005.

He led the agency network, which owns the likes of McCann (the venerable McCann-Erickson was the foundation on which the IPG empire was built), FCB, Golin, R\GA, MullenLowe, Weber Shandwick and many others, and created one of the so-called ‘Big Four‘ holding groups (along with Omnicom, WPP and Publicis).

Over the years of Roth’s tenure, IPG was subject to many a rumor, and much criticism. Many observers thought it was the runt of the ‘Big Four‘ litter, and thus ripe for a takeover by one of its rivals; while others – including some activist shareholders – thought its parts were worth more than the sum, believing it should be broken up and sold off to realise its true value.

But through it all, Roth stuck to his principles – for 15 years all told. He leaves it in arguably far better shape than he found it. It’s a measure of the man’s achievement that the tributes paid to him over the past few days have been so fulsome and affectionate. Rivals as well as those he worked with and managed have been among the cheerleaders.

Long-time adversary Sir Martin, now chair of S4 Capital, said: “Michael clearly did an outstanding job in leading IPG out of a difficult position at the beginning of the new millennium and setting it in a new direction. He increased its growth rate, both top and bottom line, and now it has almost caught up with the Big Three in terms of market capitalisation. The boy done well.”

Indeed. Another part of his legacy was an eye for a good buy – and for taking the long-term view. A great example of this came in 2018 when IPG bought the database marketing and consumer insight business Acxiom for $2.3bn, its biggest-ever acquisition. The deal raised a few eyebrows, despite the interest in data at the time; the price paid came in for particular criticism. But three years on it was put into a favorable perspective by Publicis’s acquisition of Epsilon for $4bn.

Initially IPG focused on using Acxiom’s data capabilities across its media agencies, and it took a while to figure out how best to use Acxiom across the group’s agency offerings. But Roth and his team managed to integrate their new purchase into the group, and it has contributed to profits ever since – and significantly, helped win new clients (as R/GA did years earlier when IPG bought Bob Greenberg’s innovative New York digital agency).

“Acxiom people and capabilities have played an important part in some significant new business wins,” Krakowsky said in 2019. “When it comes to data privacy, and the ways in which companies need to approach data in an age of increased scrutiny and regulation, we can also now bring [an] expertise and credibility that would have been more challenging without a company with Acxiom’s pedigree.”

So commercially there are a lot of ticks, but isn’t that what you’d expect of an accountant/lawyer? Definitely. What you probably wouldn’t have expected were the tributes to the value he placed on his people. Mark Read, WPP chief executive, commented: “Michael has always been a champion of talent as the bedrock of great agency brands. He has also been a leader in pushing for greater diversity in our industry, to the benefit of all.”

This rings so true with what we have witnessed with our clients and from many conversations over the last six months – if a business has strong leadership, is capable of navigating change and has always nurtured a deep culture across all of its people, it will have come out of the pandemic lows on the front foot. And diversity has clearly been an agenda item for Roth for some time – although there’s still plenty to be done on this front, it’s not a catching up housekeeping exercise.

All in all, I’d say that’s some legacy.